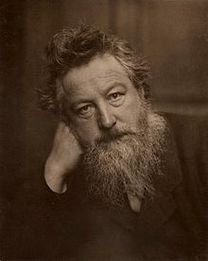 William Morris (1834-96) was a major figure within the Arts and Craft period at the end of the 19th Century, and with his friends in the pre-Raphaelite movement, he revolutionised art and design in the Victorian era.

Morris was a poet, furniture and textile designer, artist, writer, translator, printer and socialist who felt passionately about the integrity of design and its relevance to working people. Born in Walthamstow, he went to Malborough College and then Oxford where he met Edward Burne-Jones.  Leaving University he became associated with the Pre-Raphaelite artists and established Morris, Marshal and Faulkner & co, which later became Morris & co.  His business was orginally based in central London but moved to the River Wandle at Merton Abbey Mills, South Wimbledon in 1881. The works produced his world famous designs for fabrics, ceramics and stained glass.

Between 1881 and 1896 Morris collaborated with the celebrated artist Edward Burne-Jones at his workshop in Wimbledon. Morris advocated treating workers fairly, helping in their artistic and educational development. He paid above the rate to his staff, provided them with a library for their education, and clean and healthy surroundings in which to work.  Morris & Co continued to operate at Merton Abbey Mills until 1940.

He often held meetings in the Wimbledon area putting forward his radical views on art and politics.  He was a founder of the Socialist League (1884) and the Society for the Protection of Ancient Buildings (SPAB)

Although Morris died in 1896, many of his staff were encouraged by him and his ideas to become involved in community activity.  After the 1st World War, the Labour Party was established in Wimbledon.  This was also a time when workers established a number of co-operatives, trades union membership grew and so did the Labour Movement.  Our co-operative society was established in December 1921 with the aim of meeting the needs for a place and space for the Labour, Trade Union and Co-operative Movement.  Our Victorian building was quickly identified in January 1922 as a suitable place for the Society and over the next 9 months the Labour Movement actively raised the capital to make the purchase.  The building was opened on 30th September 1922 by Rt Hon Arthur Henderson MP as meeting rooms for local people and their organisations.